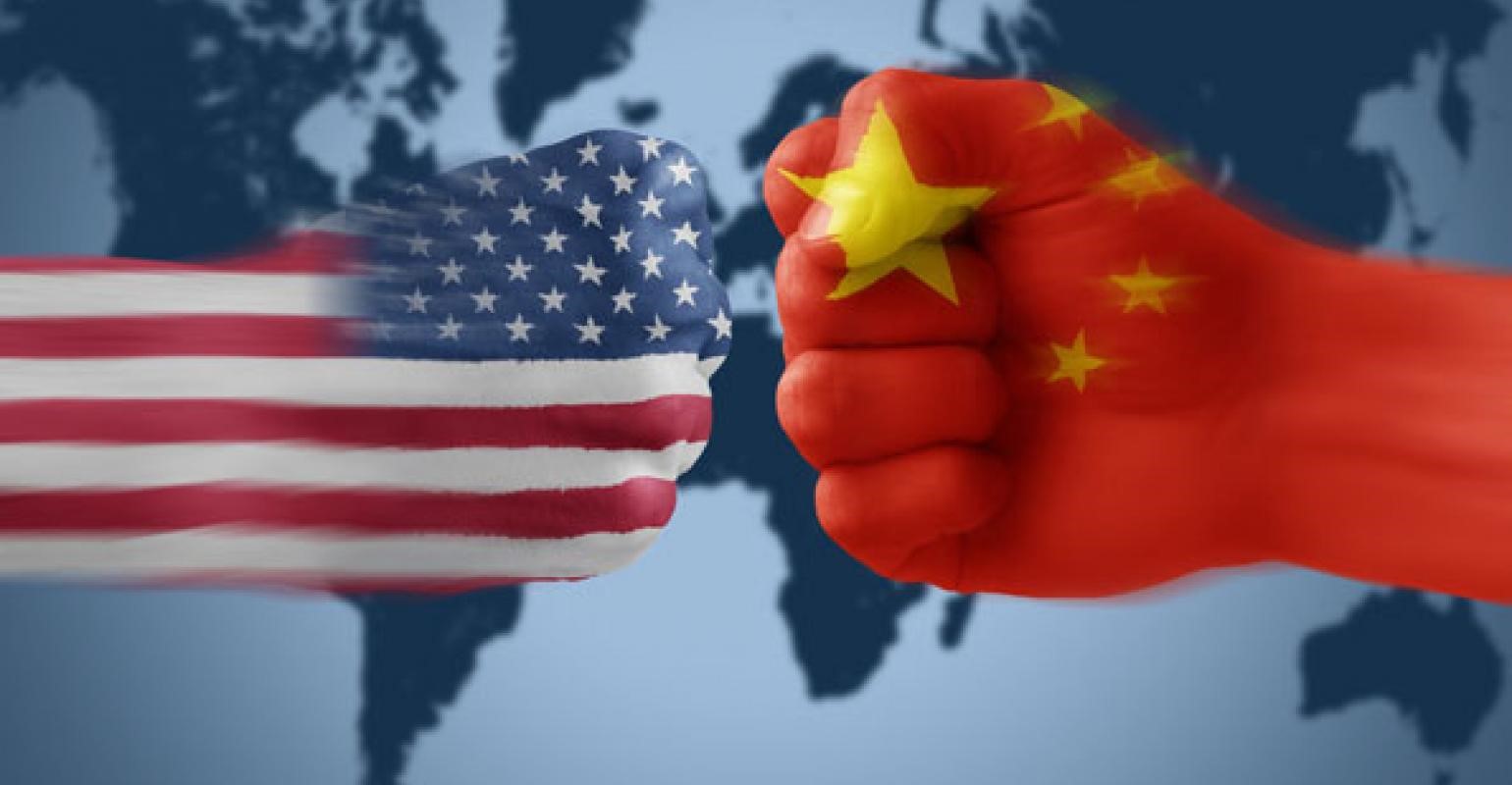 US President Donald Trump has shaken the foundations of global trade, slapping steep tariffs on billions of dollars’ worth of goods from the EU, Canada, Mexico and China.  All these countries have retaliated with levies on thousands of US products.  This has placed many of the world’s largest economies at each other’s throats. Trump has since, on two different occasions, slapped further tariffs on goods from China with the result that approximately 40% of Chinese imports (half of which are consumer goods) entering America are now subject to tariffs.

But what is a trade war? How does protectionism work? And how will it affect South Africa?

What is a trade war?

A trade war commences when one country attacks the trade of another by applying punitive taxes (tariffs) and quotas to some or all goods imported from that country.  The targeted country responds with its own punitive taxes and quotas on products imported from the aggressor.  The result is an escalation in trade barriers that has harmful effects not only on the economies of the countries involved, but also on the economies of other nations.  Trade wars also tend to escalate political tensions in the world.

What triggers a trade war?

By taxing items coming into a country, its government is generally trying to discourage people from buying them (because they have become more expensive).  The intention is that people buy cheaper local products instead, in this way boosting the country’s economy.

In the case of the United States, the President has imposed tariffs on billions of dollars’ worth of goods from around the world, but in particular on those goods originating in China.  Mr Trump is particularly keen to reduce the USA’s trade deficit with China, a country he has for some time been accusing of unfair trade practices.  He is convinced that the US’s trade deficit has had a detrimental impact on US manufacturing.

What is a trade deficit?

A trade surplus or deficit is the difference in value between the amount of goods a country buys from another country and the amount it sells to that country. If Country 1 buys more than it sells to Country 2, then it has a trade deficit with that country.  In the case of the US and China, in 2017, the value of the USA’s tangible (i.e. goods not services) imports from China exceeded the value of its tangible exports to that country by some USD 375 billion.  The US President who promised his supporters in pre-election campaigns that he would reduce the country’s trade deficit, is now determined to use tariffs to do just that.

Is a tangible goods trade deficit always an indication of serious financial problems?

The short answer is no.  Many wealthier countries have in recent decades shifted from being manufacturing economies to being service economies.

The US, for example, exported USD 242.7 billion worth of services in 2017, straddling fields such as banking, travel and tourism.  Services account for approximately 90% of the US economy.  China, by comparison, doesn’t export nearly as many services as it does manufactured goods.  In 2017, the US registered a USD 42 billion trade surplus in services (intangibles) with China.

According to the U.S. Department of Commerce, U.S. exports of goods and services to China supported an estimated 911,000 American jobs in 2015 (latest data available) – 601,000 supported by goods exports and 309,000 supported by services exports.  It is uncertain how this compares with the number of jobs likely to be created by the President’s ‘buy local’ campaign but a proportion of the 911,000 will definitely be compromised as China retaliates.

President Trump’s obsession with trade deficits is thus not always popular, with many critics labelling the US administration’s moves as protectionism.

Protectionism is the use of restrictions such as tariffs in an attempt to boost a country’s industrial activity and shield it from foreign competition.

Mr Trump’s steel and aluminium tariffs are a case in point.

At the beginning of March 2018, the US president announced a 25% tariff on all steel imports, and a 10% tariff on aluminium imports.  The reason given was that the US is too reliant on other countries for its base metals with the result that it would not be able to make sufficient weapons or vehicles in the event of an outbreak of war.

Critics, however, have pointed out that the US gets most of its steel from Canada and the EU, both of which are long-time allies of the US.

Does this type of protectionism work?

Yes, to some extent.

US steel manufacturers and aluminium producers will benefit as demand will result in job creation and larger profits.  However, US companies (like vehicle and aeroplane manufacturers) that need raw materials will see their costs rise. This is likely to translate into higher prices for finished goods which will hurt consumers.  Thus, US consumers could see car prices rising, along with the prices of gadgets, plane tickets, canned food and drinks, and anything else that is reliant on steel or aluminium. 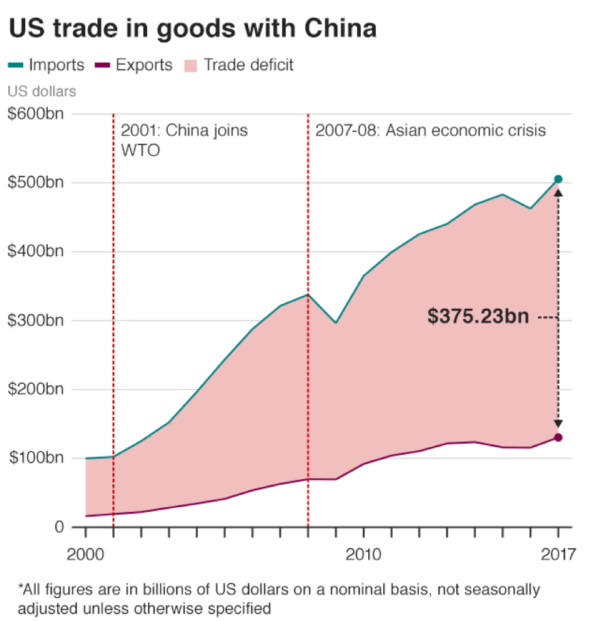 How might Donald Trump’s tariff hikes affect consumers in general?

They could affect people all around the world – especially as China has retaliated with tariff hikes of its own, taxing US agricultural and industrial products, from soybeans, pork and cotton, to aeroplanes, cars and steel pipes.  In theory, China could also tax US high-tech companies like Apple. That would deal a severe blow to the US tech giant which might be forced to raise its prices accordingly.

A global trade war is thus likely to hurt consumers everywhere by making it harder for all companies to operate, forcing them to pass higher prices on to their customers.

Does that mean that free trade is a better option?

The answer to this question depends on who you ask.  Free trade means imposing as few tariffs as possible, giving people the freedom to buy cheaper or better-made products from anywhere in the world.  It works well for companies trying to cut costs, and has helped drive prices down and boost the global economy.  Cars, smart phones, food – ‘free’ trade has brought affordable products from around the world into the homes of ordinary citizens.

However, free trade has also resulted in companies buying less local products.  Why buy from domestic sources when you can get cheaper products from another country?  The result has been a loss of jobs in wealthier countries, and uneven growth.  Thus, while free trade has made some people richer, it has also made others poorer. 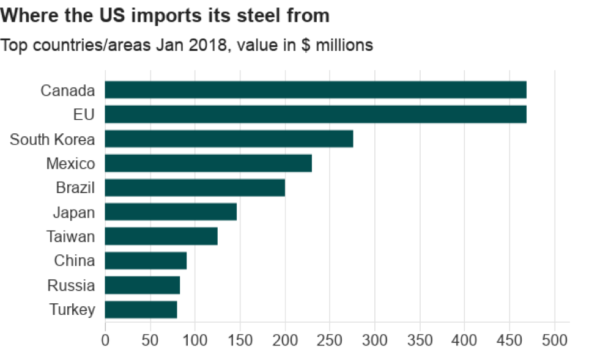 What has been the impact to date of Donald Trump’s trade war on South African companies?

South Africa also exports steel and aluminium to the US and has been enjoying duty free access under the AGOA agreement for several years.  However, whereas the amounts exported from a South African perspective are fairly substantial, they constitute only a tiny percentage of the US’ total imports in 2017 (iron and steel products: 1.3%; articles of iron and steel: 0.7% and aluminium: 1.8%).  By contrast, the US is South Africa’s second largest market for the affected steel products and the main external market for exports of articles of iron and steel.

As can be seen from the chart above, South Africa doesn’t feature in the US’ top ten importers of steel. The country was thus hopeful that like Canada, Mexico and Australia, it would be exempted from the recently imposed duties; however, the South African application for exemption was rejected out of hand.

So how are these tariffs likely to affect South Africa going forward?

According to the IDC, the direct impact on South African steel and aluminium producers will be loss of market share in the US.  However, there is also likely to be an indirect impact as the export volumes previously sold in the US by other affected global steel and aluminium producers are likely to be redirected to alternative world markets, including South Africa and South Africa’s existing export markets.  Thus, local producers are also expected to face increased competition both at home and abroad.